The store will not work correctly in the case when cookies are disabled.
Overlay 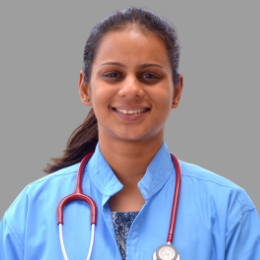 Dr. Estella – Doctor, Cessna Lifeline Veterinary Hospital, Domlur M.V.Sc with a specialization in Surgery, Radiology Dr. Estella is a Veterinary Physician and Surgeon. She did her Undergraduate and Master’s in surgery and radiology from Bangalore. She also went to China to learn more about CT scans.

Dr. Estella always wanted to be a vet. Her father, a wildlife biologist was the reason she spent her summers exploring Kanha national park and grew up to love animals and nature. She saw her first tiger when she was just 6 months old according to her parents!

As far as veterinary medicine is concerned, according to Dr. Estella states veterinary care is still quite primitive, even in bigger cities. “I would like to see more hospitals and critical care across India. I would also like to see smaller towns having access to better veterinary care” she says.

When talking about coming to work at Cessna Lifeline she says “The joy I see on pet parent’s faces when their pets have recovered and are doing well is what keeps me going. Yes, there are days that are tough and don’t go as planned, but it still keeps me motivated to come to work every day.”

When recounting stories from her time in the forests, she says she was 5 years old when she saw a leopard on foot and thought it was a big dog and started running towards it! The staff had to rush and take her away from the sight instantly. On one of her safaris, she saw a tiger moving her cubs who were about 45 days old. “I thought it was a beautiful sight to soak in!”

Her hobbies are traveling and listening to music in her free time. She loves exploring the unexplored. She recalls Taiwan as being absolutely brilliant as an experience. Her future travel plans include South Korea, Japan and the northern lights experience. “I love traveling and exploring wildlife more than anything else” she says with a happy, almost child-like ring to her voice.

You can interact with Dr. Estella at our Domlur, Bengaluru branch and get to know her better!